For Teens and Young Adults

Beginning to read novels at an early age boosts the imagination of children and naturally teaches them many moral values that come rather difficult to them.

Perfect blend of entertainment and education: 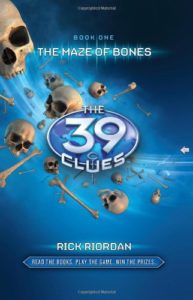 What would happen if you discovered that your family was one of the most powerful in human history? What if you were told that the source of the family’s power was hidden around the world in the form of 39 clues? What if you were given a choice – take a million dollars and walk away …or get the first clue and begin the search? At the reading of their grandmother’s will, Dan and Amy are given this choice – and they take the clue. Immediately, they are caught in a dangerous race against their own family members. The hunt is on. Think you’ve gone everywhere books can take you? Think again. Books are going to a new place, but you have to follow the clues to get there. Join Amy and Dan as they begin the hunt for the 39 Clues in “Book One: The Maze of Bones”. The high-octane adventures will continue for a total of ten exhilarating books written by well-known authors over two years. The 39 Clues also encompasses hundreds of game cards and an online world that allows you to play a part in the story and compete for 100s of prizes, totalling over GBP50,000.

Harry Potter and the Philosopher’s Stone 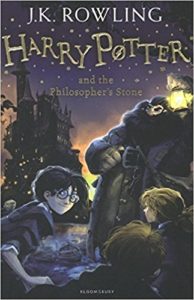 Harry Potter and the Philosopher’s Stone is the first novel of the much appreciated Harry Potter series. An abridged version of the same novel, this book has been brought out by Bloomsbury Press for children aged between eight and twelve years.

The story unfolds with a letter arriving for Harry Potter, a simple boy, that brings with it a dark secret. The letter reveals to Harry Potter that both his parents were wizards and were killed by a Dark Lord’s curse when he was just a baby.

Thereafter Potter’s journey to the Hogwarts, a school of wizards brimming with magic, mystery and enchantment, spins out into a fascinating tale. After his journey to Hogwarts, young Harry learns of a missing stone — a stone which can be both terrifying and valuable at the same time, depending on who possesses it and how one uses it. Will Harry Potter and his friends be able to get hold of the stone is how the story unfolds from here on?

It is here Harry Potter’s long journey spread over 7 books really begins. In simple words and rich prose, this children’s edition rightly captures the essence of the Harry Potter’s first novel and promises to take the children on an enchanting ride to the magical world order.

J.K. Rowling: One of the most celebrated authors of contemporary times, JK Rowling is the author of the bestselling fantasy Harry Potter series, a collection of 7 books that have been published between 1997 and 2007. These popular books by her have been translated into 79 languages, with the collective series having registered a combined sale of over 450 million copies worldwide. Apart from the Harry Potter series, Rowling has also written three companion volumes for charity and crime novels as well.